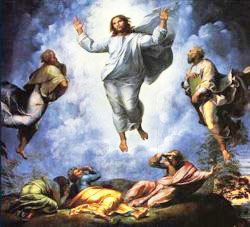 Squint and you won’t look so fat in the mirror. Take your specs off and you could obscure your vision still further. The world might look even better. Or follow the old platitude and take a second gander at your familiar cloud. Find its silver lining. Force yourself. Deep down, though, you know that it’s a normal exercise

in self-deception. We do it all the time. We’re working hard to cover up reality. We hide much. We reveal nothing.

In this Sunday’s Gospel reading, Jesus takes Peter, James and John with him to a high mountain (the story appears in all first three Gospels). In their presence Jesus is “transfigured”. Matthew and Mark use the passive verb “was metamorphosed” while Luke chooses to describe the process thus: “…the fashion of his countenance was altered”. Jesus shines. His clothing becomes bright. Two characters from Israel’s history – Moses and Elijah – suddenly appear at his side. A voice speaks from heaven. The disciples are afraid and do not understand. They babble or, at least, Peter babbles. Recognizing that the disciples do not have the words to describe what they have seen, Jesus tells them to keep their mouths shut: “Tell no one about the vision until after the Son of Man has been raised from the dead”.

Unlike the normal impulse to prettify a shabby situation, this vision strikes the disciples out of the blue. It is one which I believe has been better painted by artists, over the years, than it has been retold by preachers. It is what it is: a hint or a first installment of something that is to come. For the three disciples it is precisely what they will know and preach with clarity after Easter. It is what St Paul will one day write about to his congregations. For Peter, James and John that day, God opens the door just a crack. They catch a glimpse of the full picture: Jesus the light to the world who unites the present (and future) world of his followers with the mighty and saving acts of God in the history of Israel.

Willful self-deception closes a door. Unbidden mystery forces it open. “This is my Son”, God says, “Listen to him!”