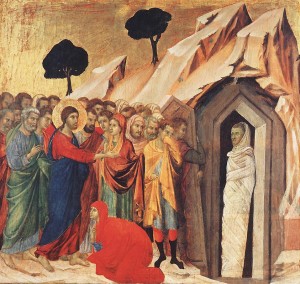 There is a pious legend that Lazarus, after Jesus raised him from the tomb where he’d lain for four days, never smiled again during the thirty years he remained alive on the earth. It had something to do, apparently, with the imprisoned souls he’d seen in Hades while he was there.

The story of Lazarus’ rescue from the grave is the final of a list of seven “Signs” which Jesus accomplished in the course of his earthly ministry as John relates it in his Gospel. From the changing of water into wine in the second chapter to the raising of Lazarus in the eleventh, the Gospel is doing the opposite of what we used to do in Primary School when we were small. Our activity was called Show and Tell. We would bring some physical object into the class and then tax our vocabulary and narrative skills by telling the other boys and girls what the thing was. John, in the Prologue, which we are possibly most familiar with from services of Midnight Mass or the end of Nine Lessons and Carols, tells us, right at the beginning, that Jesus is Word, light, power and love.

We have the telling first.
What follows in the Gospel are the signs – the showing that this is

We carry the narrative of salvation with us. These are words and stories which we know, if not by heart, then in the back of our minds. Occasionally when reading or referring to a particularly well known Scripture in church on Sunday I see your lips move. I know you know them. In these seven signs, but even more so in the evidence of the testimonies of men and women across the ages, God takes these words and makes them flesh. Water becomes wine, the sick are made whole, the outcast is welcomed in and the impossible task is accomplished.